Save the sharks, they prevent climate change!

We already know and can read about the effects of unsustainable fishing. Reduced catches of cod and more costly fish and chips are just part of the message, which can go as far as to include the ‘jellyfish soup’ predictions of Richardson et al. (2009). Collapse of some important predatory fish stocks could (and has) resulted in increases in jellyfish in the ocean, with a further consequence of this being it is also more difficult for fish stocks to recover once jellyfish have established themselves.

However, our recent paper (Spiers et al., 2016), demonstrates the potential role of predatory fish, including sharks, and other large marine predators such as whales and dolphins, of influencing the carbon budget of the ocean. In short, reducing the numbers of predators may increase carbon dioxide production of the ocean’s ecosystems and result in greater levels of climate change. 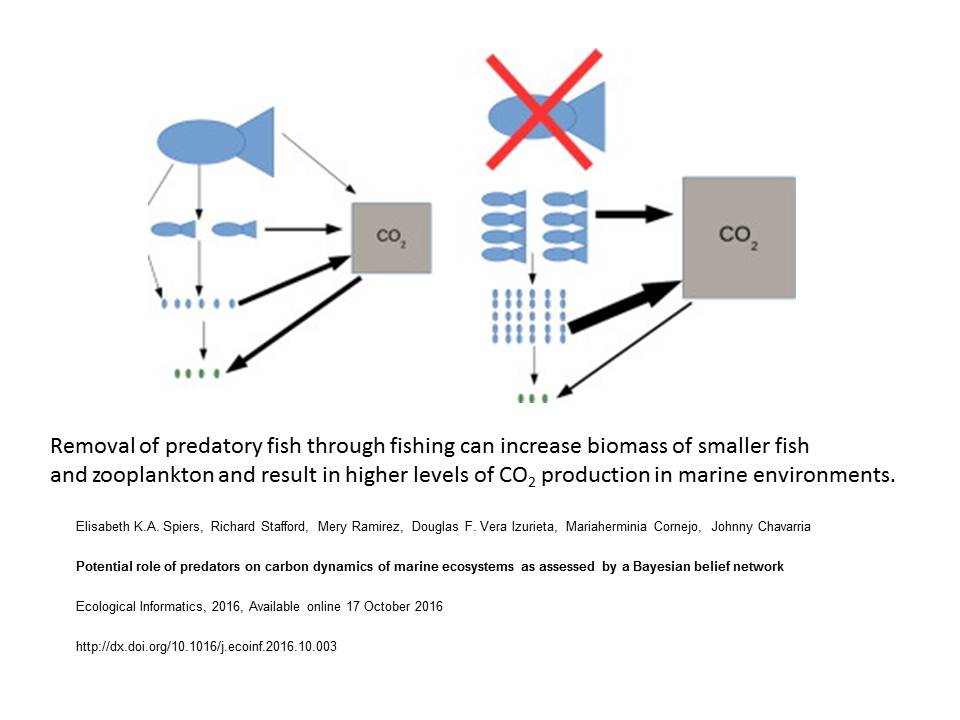 The reason is simple, and something almost every student of biology from GCSE or high school upwards will have been taught – trophic inefficiency. Energy (and biomass) is lost as it passes up the food chain. Typically only 10% is passed from predators to prey. So, removing large numbers of predators (and almost all commercial fish we eat are predatory and a long way up the food chain), results in greater levels of biomass further down the foodchain. In the marine environment, this is normally zooplankton and smaller fish. Studies have shown that respiration is proportional to biomass, so a greater biomass of animals means more carbon dioxide production.

While our study is based on a theoretical model, studies on the role of predators on carbon production have been conducted before, in simple systems consisting of only a few species (Atwood et al., 2013; Strickland et al., 2013). Again, they have shown that carbon production can be increased by removing the top predators from the system. More recent work has also demonstrated how predators can effect feeding of prey species and subsequent storage of carbon in marine ecosystems (Atwood et al., 2015). Furthermore, there are other studies such as that by Nicol et al. (2010) that demonstrate the potential role of whales on climate change, though providing nutrients for phytoplankton (the ‘plants’ of the sea) to grow (largely by transporting iron across thermoclines, by feeding at depth and defecating at the surface, allowing these nutrients to come to the surface waters where light is also available for photosynthesis).

It is important to realise the negative effects that abusing ocean ecosystems are having, and to begin to realise the potential consequences are far more far reaching than just for the fish being removed. Despite the recent reduction in demand for shark fin soup, shark finning is still continuing at a very high level in many areas of the world, decimating shark populations even from the levels present 20 years ago. Even sustainable fishing practices involve reduction of fish stocks (typically to half of their natural size), as this allows the greatest catch to be taken each year – and as such, even sustainable fishing could have big effects on ocean carbon production.

However, there are positives from this research too. Allowing predatory fish, sharks, whales and other marine animals to increase (i.e. their populations to recover), will mean that carbon production of the ocean is likely to decrease (from current levels). Creating sustainable fisheries (as a first step), keeping the ban on commercial whaling and outlawing (and enforcing existing bans) on shark finning will have a double positive effect. Not only will numbers of these large, beautiful and enigmatic creatures increase, but also the amount of carbon dioxide entering the oceans (causing acidification) and the atmosphere (causing climate change) will be reduced.